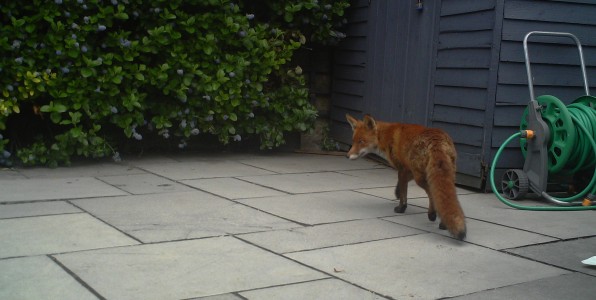 For many urban dwellers getting a glimpse at a fox was often a memorable moment. Although urban foxes have had a presence in Dublin for many years their numbers are definitely on the rise. Some say that development in the boom time encroached on their habitat; the redevelopment of waste land and farm land on the peripheries of Dublin for housing and retail parks perhaps displaced a certain number of foxes. But the fox being an adaptable creature seem to have adjusted to suit the urban habitat-taking up residency in derelict or quiet gardens, overgrown areas in parks, river banks and railway lines. With an adequate food source and habitat available, fox numbers in Dublin seem to be on the increase.  Urban foxes in Dublin are a more familiar sight than ever. They are often seen in midday but more commonly seen roaming the streets and gardens at dawn and dusk. One family in south Dublin were left horrified after a baby narrowly escaped injury when a fox entered her bedroom, read article here.

The urban fox is starting to become a victim of its own success. Numbers have now reached a level that can’t sustain a healthy population. We are constantly seeing mange infected and emaciated urban foxes that seem to have lost all fear of humans and because of the population increase and habitat decrease they are starting to take up residence in private gardens. Some of the typical areas that we have removed urban foxes from are under garden sheds, in oil burner sheds, under decking and in playgrounds. Last year we even came across a family of urban foxes living under a boat that was being stored upside down. 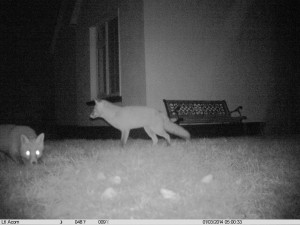 Dublin’s Urban foxes captured on our specialist wildlife camera. Sneaking around the front of a client’s house at nighttime.

Some people love the idea of urban foxes in their area, often romantically associating them with some country scene which is understandable considering how magnificent a healthy fox can look. But we should not forget that the fox is top animal in the food chain in Ireland. They mainly live on scraps, rubbish, left over pet’s food as well as getting donations of food from well-intentioned people, but when you work as a wildlife management professional you get to learn what else they eat too. Urban foxes do mainly scavenge but they do also hunt and will kill chickens, hedgehogs, pheasants and lambs, pet rabbits, bantams and guinea pigs have also been taken. It takes a well-designed hutch or pen to keep a persistent fox out.  Three years ago we were contacted by a client and had to deal with a particularly upsetting case, their five month old pet bichon frise pup was severely mauled by an urban fox that had taken residence under their neighbour’s shed. After the pup was rushed to the vet it had to be put to sleep, such were its injuries. Understandably this was a deeply traumatic experience for those concerned.

City gardeners, green keepers and landscapers know only too well the damage that urban foxes can cause. The stench of fox urine left by males marking their territories can be off putting to say the least. Damage to their lawns and flower beds by digging and rooting of well-manicured lawns and playing fields can be a great bone of contention for greenkeepers and landscapers and avid gardeners. There is the additional work of constant cleaning up of fox excrement that may be a vector for a range of disease and parasites that can be spread to both humans and pets, such as Toxolariasia and Hydatid disease. Precautions should always be taken when cleaning up fox excrement, gloves should always be used and hands thoroughly washed as ingestion of contaminated spores could be potentially fatal.

Sarcoptic mange is another problem associated with urban foxes. This highly contagious skin condition is frequently seen in urban foxes that we deal with. You will know if foxes in your location are suffering from mange as they often have bald patches on their fur and may have rat like tales. These foxes are often hungry and malnourished looking. On one occasion a client referred to an urban fox in her locality as the devil’s dog but the truth of the matter was that this unfortunate fox was suffering from a serious case of Sarcoptic mange. Sarcoptic mange can be spread to domestic dogs and is a regular occurrence in areas where infected foxes use the same gardens as pets and if left untreated it can be fatal. The good news is that Sarcoptic Mange can be easily treated with medication from your veterinarian although this can be expensive.

The fox is a beautiful creature and has a vital role to play in our ecosystem but you also have the right to enjoy your garden with or without urban foxes. We have seen first-hand the damage urban foxes can and do cause and have provided effective solutions in numerous situations. If you need any advice in relation to a fox that may be frequenting your property or residing in your garden, please consult our urban fox page or do not hesitate to contact us for further information.